Possibly the largest transparency report time span that I’ve seen as a blog post to date but as we’ve just passed the beginning of a new tax year here in the UK, I thought I would write a report that encompasses everything. Next time, I will focus on reports in smaller chunks.

Something I’ve noticed many WordPress-centric business transparency reports fail to mention is the time investment by their author(s). Without this, I don’t feel a transparency report reveals the true cost to produce something which has one or more saleable assets. This report will give the breakdown in two sections – direct outgoing expenditure and total cost of the project, as close as I can work out.

As I mentioned in my previous post about the Origins of BNFW, I hired a developer to help me with working on the plugin. This, as you can imagine, has been the largest single expenditure to date but one that has been 100% worth doing.

If you’re selling anything online, you need some kind of infrastructure in order to do so. Mine consists of one of my hosting accounts under my reseller package, domain name, SSL certificate, and some plugins. As this website was launched on 28th September 2015 and infrastructure costs are usually billed in yearly amounts, that is what I’m showing below even though I haven’t used up my ‘quota’ for these services yet.

This is where I think things get quite interesting (read: complicated). The amount of time that I’ve been spending on BNFW has been slowly increasing over the period of the last year.

Before I started selling add-ons, it was just a case of re-arranging the roadmap in the order of preference based on my intended direction for the plugin, user requests, and bug fixes, whilst issuing releases and providing a little support. Now, it’s all of those plus quite a lot more support, planning add-ons, dealing with payments, marketing and automation, and managing the website.

I’ve spent a long time thinking about how much time I invest and have previously invested in BNFW and I’ve come to the following conclusion. Whilst higher than I initially expected, I believe it to be fair whilst also probably still being a bit conservative. To try and make it as even as possible, I’ve ignored holidays and time off, etc. to account for some days where I do more work on BNFW than others.

I’m pleased with the overall costs of running BNFW. Whilst many might consider the investment of my time ‘free’, I do perform BNFW tasks during my regular working hours (9am – 5pm) at least 90% of the time so this is time that cannot be spent on other client work for my business. However, as I see BNFW becoming a larger part of my business in the future (and I have no reason to believe that it can’t or won’t be), then I feel the investment of my time is valuable and should be considered at every stage. Even if many people don’t factor time into their costs, I think it’s important to consider it or at the very least, keep track of it.

Now that the outgoings are out of the way, let’s talk about sales. I opened the BNFW Add-on Store along with the Custom Fields add-on on 12th January 2016. This was shortly followed by the Per-post Override add-on on 12th February 2016. I made my first sale on the first day of opening the store and have been pleased with the overall sales to date. This is especially true seeing that BNFW is still such a relatively small, unknown plugin to many, and the two add-ons are reasonably niche in their functionality.

One thing that is worth noting at this point is that I have “purchased” a 15-site license of both add-ons for testing purposes. I did this manually and assigned a value of zero to the order so that payment didn’t have to be taken but the licenses will still work. I don’t consider these to be expenses as the work on the add-ons has already been done and selling licenses doesn’t require any input from me during the checkout process. These two licenses are not included in the above sales figures.

Since launching this site on 28th September 2015 and moving all documentation pages from my business’s website to this one, the site has had (at time of writing):

Interestingly, since adding the pop-up to the site that gives you 10% off your first add-on purchase when you sign-up to the mailing list, subscriptions have slowed and no one has used the discount code yet! A bit surprising but then again, not so surprising given the rising ineffectiveness of pop-up modals. I’ll probably opt for a different mechanism in the near future.

I’ve answered 56 of 63 support threads that have been created on the Free Support Forum within the past 2-months. Any unanswered threads are due to bugs awaiting fixes or awaiting additional information from users.

I’ve closed 3 of 3 Priority Support tickets which have been opened by purchasers of a BNFW add-on.

To date on WordPress.org, Better Notifications for WordPress has received forty-nine 5-star reviews, three 4-star reviews, and one 3-star review. It has been downloaded 38,442 times and is being used on over 5,000 websites. As you might expect, the highest numbers of downloads are immediately after new releases are made. 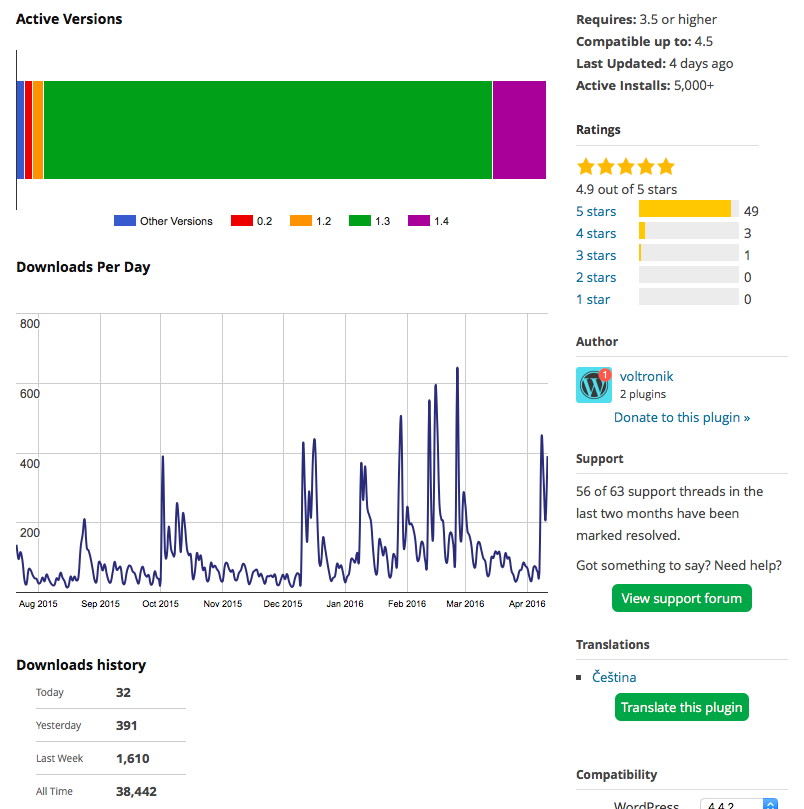 I’m currently working out the roadmap for the next two releases of the free BNFW core plugin. This may end up being more than two releases but once these are done, I will have achieved around 75% of what I originally wanted BNFW to do out-of-the-box. More feature requests will undoubtably come in, and I’ll add those to the roadmap where appropriate.

One major request that I’ve been planning extensively as the third add-on to the line-up is the ability to narrow down notifications to specific categories, post titles, etc. This is going to be called the ‘Conditional add-on’ and is going to be superb. It’ll most likely be released in a number of stages due to it’s functionality and complexity but I think it’s going to be great once it’s done. I’m aiming to get it out before Christmas, which sounds like a long way away but for me, when it comes to big tasks such as this, there’s a lot of work to do and I don’t like rushing things – something I feel is reflected in the ease of use of BNFW and corresponding add-ons.

I hope you’ve enjoyed this first transparency report and I look forward to publishing the next one in a few months time.