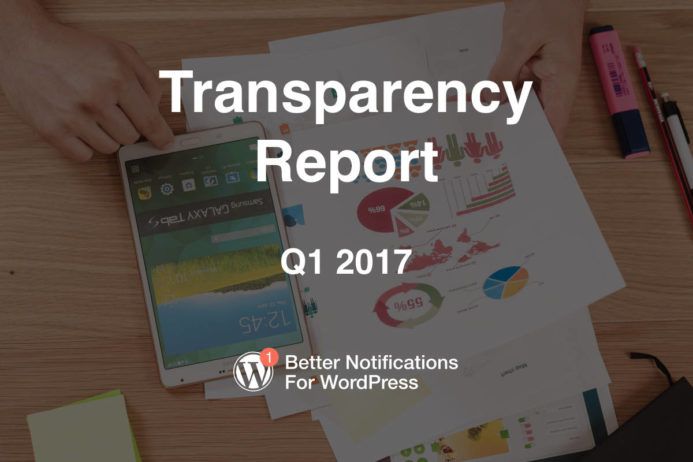 It’s been three months since my last transparency report so here’s everything that’s been going on for BNFW in the first quarter of 2017.

I spent some time streamlining the roadmap for quicker, more consistent releases of the core BNFW plugin, updates to existing add-ons, and releasing new add-ons. This has worked out well and I feel that something is being released on a near-monthly basis. Overall downloads have been steady, picking up some pace between releases and I can see an overall uptick in the number of daily downloads compared to previous 3-month periods, which is always nice to see if you’re trying to grow something.

A new add-on was released called ‘Send to Any Email’ and allows you to enter an email address, or use a custom field shortcode (when used in conjunction with the Custom Fields add-on), to send notifications to non-WordPress users.

1.6.1 – 1.6.3 came with bug fixes and overall improvements as well as introducing a number of new small features including:

This is where the last release didn’t go so well. Despite extensive testing, the inclusion of ACF front-end form support caused issues for a small subset of users. Here’s an explanation of the problem, copied from a Priority Support ticket to a recent customer:

ACF doesn’t use WordPress standard coding conventions in order to add posts that have been submitted via it’s front-end form (acf_form) into WordPress. It does so by manually adding it to the database. As such, trying to find a way to support front-end forms through ACF has been incredibly difficult. It’s truly frustrating because I would love to be able to provide full support for ACF’s front-end forms. My developer and I recent found a hook in ACF that enabled us to add support for triggering notifications when posts were submitted via ACF’s front-end form however, as you may have seen in the last update of BNFW, despite extensive testing, this has broken BNFW’s Custom Fields add-on and is triggering multiple notifications for various types of notification for a small selection of users – not even all users of the Custom Fields add-on are experiencing this. As such, this has been an incredible tricky bug to track down. After much testing, last week we were able to boil it down to the hook in use that triggers notifications from an ACF front-end form and also found that there is no way of fixing it. As such, ACF front-end form functionality will be removed from BNFW in the next release until a 100% working method can be found or developed.

If you’d like to retain this functionality, you can keep your version of BNFW at it’s current version.

As mentioned, I’d love to provide support for ACF’s front-end form so am looking at all possibilities and am hoping the ACF author might be accommodating in providing compatibility with BNFW (and other plugins too, the issue isn’t specific to BNFW).

So there it is: ACF front-end form support will be removed from the next version of BNFW (v1.6.4), due out within the next few days and will not be returning until a completely robust solution can be found. I shall be contacting Elliot Condon of ACF in the next few days and I encourage anyone that would like to see better support for BNFW and ACF’s front-end forms, to do the same, here.

On a positive note, an update to the Custom Fields add-on was released yesterday that fixes an issue where ‘Custom Field Updated’ notifications weren’t being sent out, when used in conjunction with BNFW v1.6.3.

I performed a normalisation on all prices in the store in March. Some prices went up, some went down. Ultimately, I felt this was required for two reasons:

With regards to the second point, I now feel / know that this isn’t the case, so can I can progress more rationally with regards to pricing.

Sales-wise, March was actually the best month to date for BNFW, earning £725.50 across all add-ons. Here’s a screenshot of sales progress since opening the store showing a pleasant overall rise.

Since adding PayPal as a ‘bank account’ within Xero, reconciliation has been a doddle, providing that you only have sales coming in and balances going out. Using it for buying products for business is not a good idea and just complicates things. For this, I use a separate PayPal account. I’d really love it if Stripe was this easy but for now, it’s still a royal pain and requires logging into Stripe, checking the transfers and manually matching customers with payments in Xero. Eurgh.

I’ve answered 43 of 50 support threads that have been created on the Free Support Forum within the past 2-months. Any unanswered threads are due to bugs awaiting fixes or awaiting additional information from users.

I’ve closed 13 of 14 Priority Support tickets which have been opened by purchasers of a BNFW add-on.

BNFW 1.6.4 will be released in the next few days and a number of improvements are being worked on for some of the existing add-ons. The Summer looks to be an exciting time for developing new add-ons, including some highly requested ones. As always, if you’d like to stay in the loop about new add-ons, please consider signing-up to the mailing list.

Until next time, have a good Summer!