It’s been three months since my third transparency report so here’s everything that’s been going on for BNFW from 7th October to 31st December 2016. Today also marks one year since I released my first Better Notifications for WordPress add-on and I thought I’d make this post a combination of a transparency report for the past 3-months and a review of the past year.

In December, I released 1.6 of the free core plugin which culminated in several months of planning and development. It was a huge release – one of the biggest to date, and included a lot of new features, fixes, and improvements all round. Additionally, it received more downloads in a single day than the first version received in its entire first year on WordPress.org! I’m really pleased with how BNFW is shaping up and how far it’s come since 2013.

In case you missed it, here’s the changelog for 1.6:

* New: Anonymous tracking of the features you use in BNFW is now an opt-in checkbox on the Notifications > Settings page. Please consider checking this box to help make BNFW even better. You’ll also receive a 10% off coupon code when you sign-up to the mailing list too.
* New: Notifications for privately published posts / pages / custom post types.
* New: Notification and accompanying shortcode for customising WordPress Core Automatic Background Updates (Success / Fail / Critical).
* New: Notification for User Password Changed.
* New: Notification for User Email Changed.
* New: Shortcodes for showing the old and new user role when used in conjunction with the User Role Changed notifications.
* New: You can now add a ‘Reply To’ name and email address in the Additional Email Fields for all notifications that support it.
* New: You can now prevent yourself from receiving notifications of comments or replies to comments on one of your posts by combining the two checkboxes ‘Send this notification to the Author only’ and ‘Do not send this Notification to the User that triggered it’.
* New: All transactional notifications can now be set to either HTML or Plain Text.
* Improved: Better compatibility with Theme My Login.
* Improved: Re-worded a checkbox to be more understandable. It did say, “Disable this Notification for the User that triggered it”, but now says, “Do not send this Notification to the User that triggered it”.
* Improved: Compatibility with Mashshare.
* Fixed: Global User Shortcodes weren’t being outputted correctly in the ‘Lost Password – For User’ notification.
* Fixed: Child themes weren’t being registered correctly in the filter when using the front-end forms filter.
* Fixed: The number of options within notifications was being limited to the number of blog posts WordPress was set to show.
* Fixed: The ‘Shortcode Help’ button wasn’t linking to the BNFW website correctly for some BNFW add-ons.

Whilst I’ve always tried to find the balance between developing features for the free plugin and paid add-ons, sometimes the line can be pretty fine.

I really dislike plugins that give you a bit of a free plugin, just enough to lock you in, and then force you to purchase add-ons just to get some fairly basic features. This, I feel, is an abuse of the WordPress add-on model and isn’t harmonious with the spirit of WordPress. Instead, I’d prefer that these plugins were solely premium, compensating for their lack of showcase on WordPress.org by being on CodeCanyon or another plugin shop site. Alternatively, offering a free version and then a more full ‘Pro’ version could work well, whilst still maintaining a presence on WordPress.org. This requires careful planning and an understanding of a plugin’s user base however, to ensure you know exactly at what point to place features out-of-reach of the free plugin and put them into the pro plugin instead. There’s nothing wrong with this, especially if you offer a decent free plugin to begin with.

BNFW aims to do two things well in this area: offer a solid free plugin that does what it says whilst offering add-ons to, quite literally, ‘add’ to this experience and extend the core free plugin to new areas that the majority of general users wouldn’t need but heavy or power users would like.
In this scenario, at some point since the last transparency report, I realised that the Global Shortcodes feature from 1.5 of BNFW should have definitely been a paid add-on and not included in the core plugin. I could have kicked myself when I realised that and immediately searched through the plugin to see if I had missed anything else. Lucky for me, I don’t feel that I have and if anything, by including the Global Shortcodes functionality, it kind of feels like I’m giving away an add-on for free. Overall, I’m fine with that, but certainly something I wanted to mention in this post.

WordPress Support Forums: Better but not as Good

I mentioned in my last transparency report that whilst the upgrade to the WordPress support forums was a welcome and overdue update, it seems that not a lot of progress has been made in restoring some crucial functionality for plugin authors, such as RSS feeds for updated threads and adding tags without having to reply as well. Good things are most definitely: being able to set a thread as resolved without having to reply as well, the design, and the security that comes with a more up-to-date version of bbPress.

I’m not making light of the work that has gone into the upgrade or the amount of work it might take to restore these pain points but currently, I feel that the lack of these features is damaging to the WordPress eco-system in that users and authors alike, aren’t being fully notified of goings-on. I’ve already recognised the decline in thread replies via the free support forum is most likely due to one or more of these issues and I know many other plugin authors feel similarly. I hope these issues are taken seriously by the team at WordPress.org and that there is a plan in place to restore functionality or improve / replace it with a REST API – anything but manually checking for anything new.

Progress is on the Wall

Many businesses like to know what their key metrics are. Whether these are sales, number of users, tweets, or service uptime, it’s good to know where things are and, perhaps most importantly these days, in a way which is completely live: straight from the beating heart of the business.

Progress on BNFW as a project / side-project / business extension / business development (call it what you will) has been increasing since opening the add-on store a year ago today and I wanted a better way to see how things were going. So, I set about looking for some dashboard software that would allow me to do just that.

Firstly, whilst there are a few options out there, there weren’t as many as I’d thought, and they’re all fairly expensive for some reason. The closest I’ve found in terms of balance between ease-of-use, features, and price is Freeboard: a free (for public boards) version of Geckoboard.

Our living room TV was replaced with a glorious new 49” Samsung back in the Summer and our old (2007 model) 32” Samsung was sat around waiting to be disposed of, so I decided to put it to good use, buy a bracket for it, and put it on the wall. I connected it up to the Mac Mini that sits behind my main work machine and runs various aspects of my home, opened Freeboard in Safari and set it to full screen.
Now, just above my desk, I have the key BNFW metrics at a glance: Total Sales, Sales this Month, Sales Last Month, Total Downloads, Overall Rating, Mailing List Subscribers, BNFW Intro Video views, and Website Status (although, this is currently not working properly). 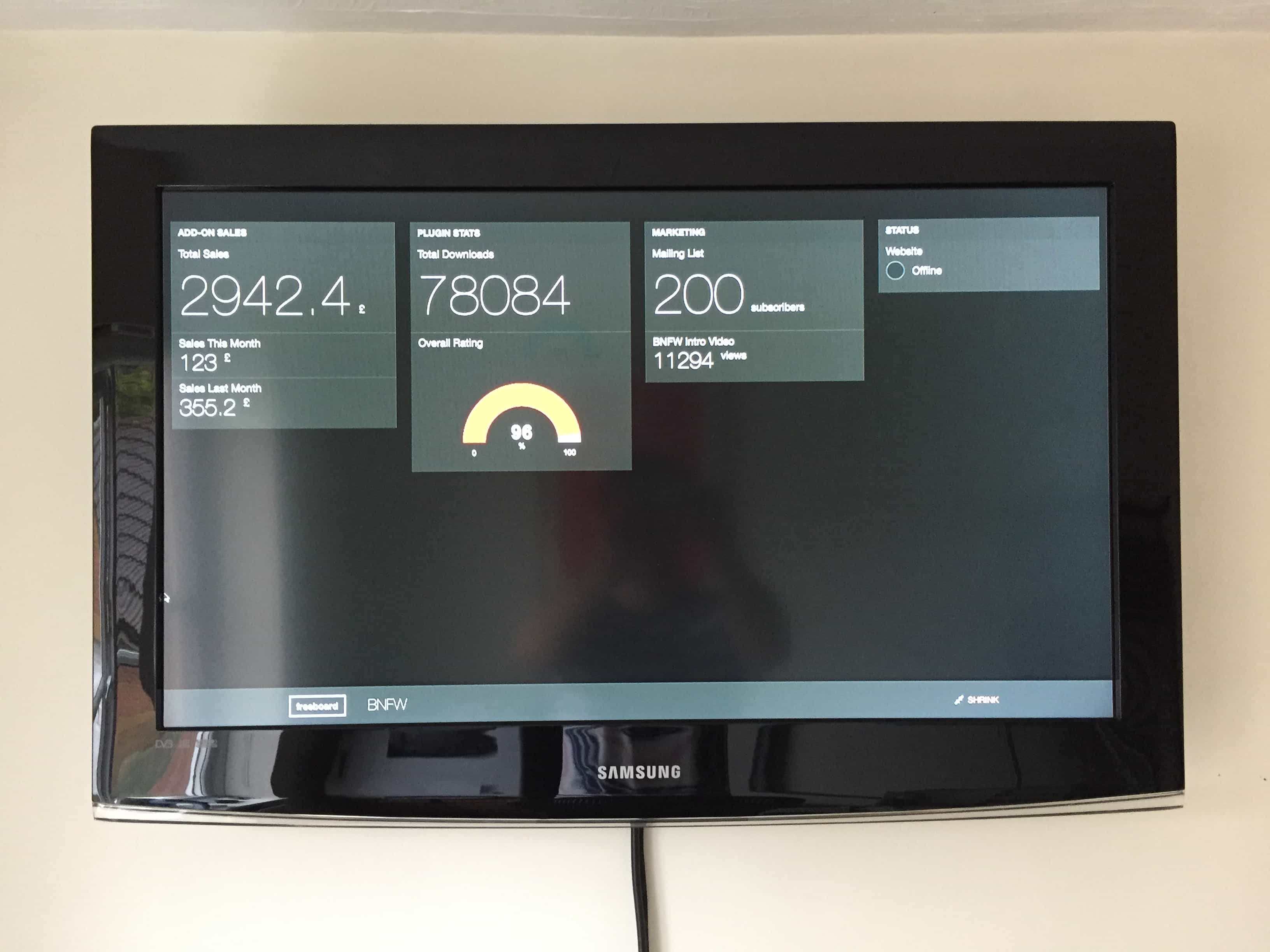 It’s worked really well so far but I’m already thinking of ways that I can improve it by creating something with Zapier and Google Sheets. Watch this space.

Speaking of Zapier, it has completely replaced IFTTT for any automation of BNFW tasks since they decided to butcher the service and make it more difficult for developers to want to get involved with it. Oh well.

I’ve implemented an abandoned sales recovery plugin to the BNFW website in order to reduce any abandoned carts. There aren’t many of these anyway but as they say, every little helps!

I can honestly say that I am confident in BNFW.
Through careful testing and not releasing anything prematurely, when an issue is reported, I can point a user to this support document, and assume, most of the time, that the problem will reside with another plugin or theme. This isn’t 100% of the time, but running an add-on store off the back of a plugin that you know is a pretty solid piece of development is a really great feeling. If you want to build something, I can’t recommend time, patience, and conviction nearly enough. For lack of a better term: It requires balls. And, eventually, it should pay off.

This site has been making the rounds and it included some nice metrics. The result was something that made me feel good.

My Year in WordPress (more specifically BNFW) is available on https://t.co/Kj3nJiSS05. A good year!

Although not included within the timeframe of this report, I can say that the total sales of the first year of opening the BNFW Add-on Store from 12th January 2016 to 11th January 2017 is: £2942.40.

As they currently stand, mostly pulled from the big screen on the wall above my head:

I’ve answered 43 of 46 support threads that have been created on the Free Support Forum within the past 2-months. Any unanswered threads are due to bugs awaiting fixes or awaiting additional information from users.

I’ve closed 6 of 6 Priority Support tickets which have been opened by purchasers of a BNFW add-on. 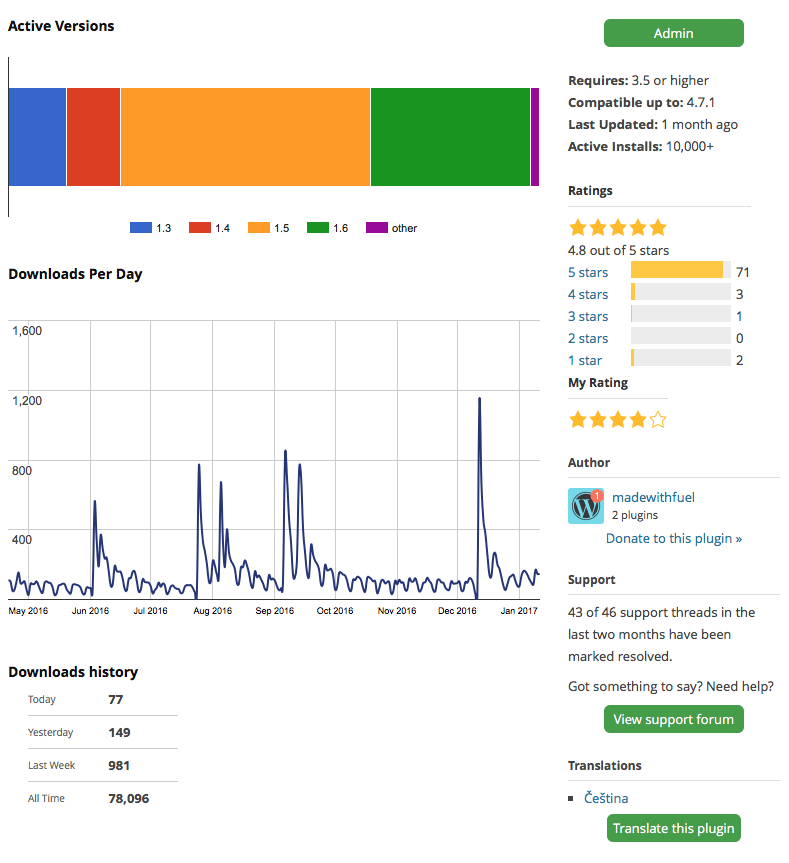 Just before Christmas, I spent a little time organising the roadmap for the next 8-months of BNFW development.
This includes 4 major point releases for the free core plugin, and 4 new add-ons as well as improvements to some of the existing ones. After this year, BNFW should be around 90% complete, at least in terms of the original idea I had for the plugin. This isn’t to say it’s nearly done though: far, far from it.

Anyway, this post has gone on long enough so, I leave you with a quote that I had to include here:

“Success is built on trust. Trust starts with transparency.” – Salesforce