It’s been three months since my first transparency report and as I decided to write these quarterly, I thought it was about time I did another! I thoroughly enjoyed writing the first Transparency Report back in April and it received some wonderful comments from members of the WordPress community. Hoping that the second will be helpful and interesting again. So here goes with everything from 7th April to 28th June 2016.

I released the third add-on for BNFW on 27th April 2016. The Update Reminder add-on is small and simple: it notifies users (and/or user roles) when a post / page / custom post type hasn’t been updated in a set number of days. That’s it. Very handy for institutions to remind students to update their homework / coursework, staff to update their posts, clients to update their pages so their website looks fresh, and so on.

I released version v1.4.1 of BNFW on 3rd June. Here’s the changelog:

A common theme in many (most?) transparency reports is how everything is absolutely, wonderfully great and that nothing ever goes wrong. Most of the time, it is good but that’s not always the case and as most WordPress plugin authors will know, once you release a plugin, you’re essentially entering the realm of becoming support staff, even if you don’t want to be. I think I handle support pretty well and I’m pleased that I manage to help so many people and close their support threads quickly after being resolved, something I know I won’t be able to do so well forever as BNFW grows. I’ve had a few 1-star reviews before which I’ve been able to convert into 3-star, 4-star, or even 5-star reviews within a matter of hours. This is usually done because someone either doesn’t fully appreciated that you should ask for support first and then leave a review or that they don’t expect a reply to their review and receive good support. Not all WordPress plugins can boast good support after-all and collectively, whilst I think it’s getting better, many plugin authors still think that if something’s open source, then you can expect bugs and get over it without complaining because well, it’s free. It’s possible then, in my experience, that some users expect no support and when they get it, they’re very pleased and can easily be swayed to change their review. Alas, it’s not always the case and in May, I received my first 1-star review that, despite my best efforts and being very polite, I could not prompt a reply from the reviewer. A shame but something I knew was inevitable.

Moving on, I revamped the Your Account section to be much easier to use – it now has it’s own sidebar for navigation and seperate pages for each section: Open Priority Support Tickets, Create a New Priority Support Ticket, Purchase / Subscription History, and Your Details. Before, it was all lumped into one big page which, although functional, wasn’t particularly easy to use. I don’t want customers to be put off purchasing or renewing add-ons in the future based on poor website UX so felt this was a worthy use of a little time.

I also created a ‘Known Issues‘ page so that I could document anything that was reported or I came across in my testing to avoid multiple support threads about the same issue.

This is a section I was looking forward to writing a bit about. As BNFW grows and starts demanding more of my time, the need for automating tasks has become essential in keeping me sane as well as ensuring that I spend the necessary time focusing on my day job. Up until a few weeks ago, I was using IFTTT for keeping track of support tickets, social comments, etc. but I’ve reached the limitations of automation that I feel the service had to offer so have now opted for the more beefy Zapier instead. In combination with Slack, I feel this is a pretty powerful, searchable, and useful system. Here’s some of the tasks that I automate, with lots more in the pipeline:

As you can probably see, I like Slack. It’s incredible useful for logging everything so that I can search for something later and by funnelling everything into a more ‘chat room’ style app, I don’t have to look at it all the time whilst also keeping my inbox nice and clean. I’ve calculated that the time saved automating the first item in the list above pays for the Basic Plan of Zapier on its own every month so the rest is a bonus to me.

Update Reminder add-on: No sales, yet.

Moving to a Yearly Subscription Model

It’s now gotten to the point where in just over 6-months time, in January 2017, I should be seeing my first add-on renewals from (hopefully) happy customers. After a bit of deliberating, on 10th June, I purchased and integrated the EDD Recurring Payments extension. From that point onwards, any purchases will automatically be a yearly, auto-renewing subscription as opposed to a one-off purchase, with the option of renewing a year later. Customers can naturally cancel their subscriptions at any time (in fact my first subscription-based customer did just that) but I felt this was a more reliable revenue model than the previous method, something I know many WordPress plugin and theme authors are also considering or moving to at the moment.

Following on from the previous transparency report and my observation of less people signing-up after implementing a pop-up encouraging sign-ups to the mailing list, I have since re-styled the pop-up by making it less intrusive and a lot smaller. This seems to have resulted in an increase in sign-ups. I’m still not convinced that a pop-up is the best way to handle this but I haven’t had a chance to look further into alternatives yet.

I’ve answered 37 of 43 support threads that have been created on the Free Support Forum within the past 2-months. Any unanswered threads are due to bugs awaiting fixes or awaiting additional information from users.
I think the drop in support threads is down to me spending a fair amount of time improving the documentation on the website, implementing decent search (using the fantastic SearchWP, of course) and adding the Known Issues page (mentioned above).

I’ve closed 7 of 8 Priority Support tickets which have been opened by purchasers of a BNFW add-on. The remaining open ticket is pending some development to improve the functionality of the Per-post Override add-on so I’m leaving it like this until it’s done.

To date on WordPress.org, Better Notifications for WordPress has received fifty-eight 5-star reviews, three 4-star reviews, one 3-star review, and the one 1-star review mentioned above. It has been downloaded 47,554 times and is being used on over 6,000 websites. 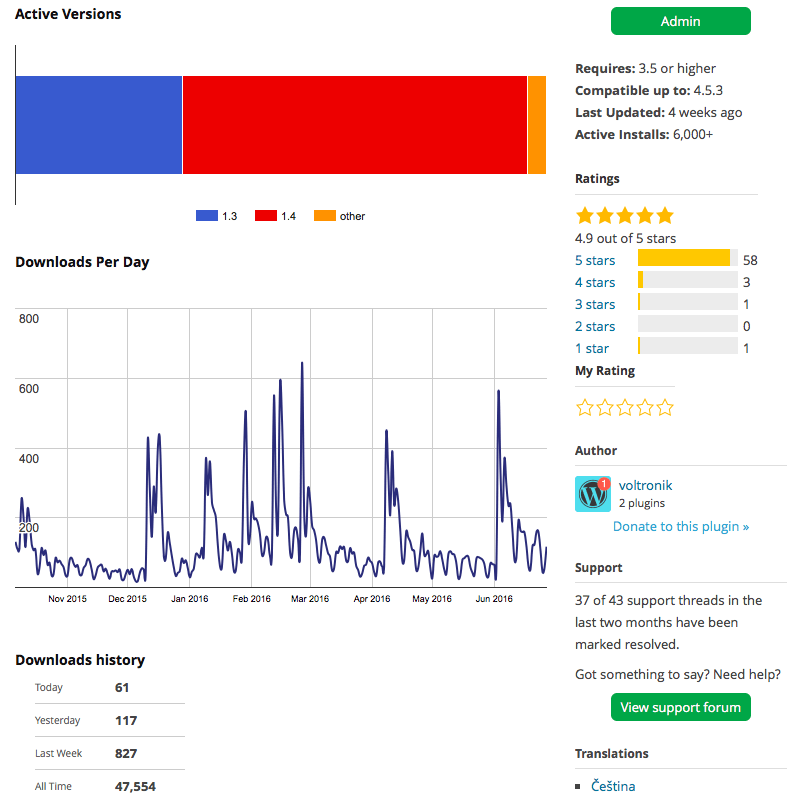 I’ve finished outlining the next version of BNFW which will add some ‘quick wins’ in the form of easy to add and often requested features. This should be out in mid-late July, all things going well.

I’m planning to begin work on a major BNFW add-on in the coming months – the Conditional add-on, and hope to have something out, even if simple, by the end of the year.

Oh, and I voted to Remain in the EU.